We are looking at structural changes that could introduce “Code for” entities created around individual volunteer relationships aside from our Code for America Brigades. This would mean that as long as there is one person who has a formal relationship with CfA in X area, there can be a “Code for” in X area.

A key consideration for this concept is if there are multiple individual volunteers in the same region that have a relationship with Code for America, then how would those individuals interact with each other and make decisions under the banner of a “Code for X” that represents that region?

This is a fundamental change that we are still investigating (as in, it could happen, but we don’t know yet) and we will update the Network community when we have substantial developments on this topic.

Brigades take a lot of time, energy, and commitment to run and sustain so the idea behind this updated chapter model is to have opportunities for folks to organize CfA-affiliated volunteer efforts locally without needing to build and maintain an existing fully-fledged Brigade chapter in the area. 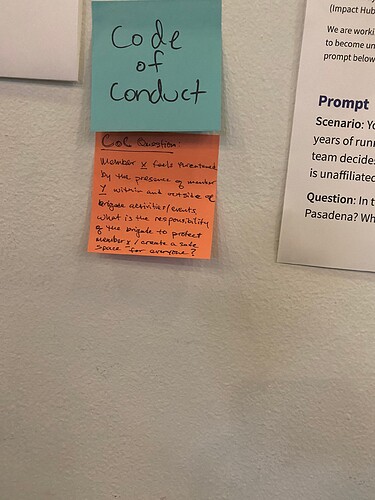 Leading Code for the Carolinas, where there have historically been multiple Brigades in close proximity, has given me a lot of opportunity to think about Brigade structure and interactions.

Assuming there will be minimum standards established for being designated as a Brigade, I think smaller local entities make sense. However, I think they should all need to be one Code for if they are in the same community. This would facilitate building core teams, deter overly ambitious founding, and, importantly, allow for the organization to present a unified voice to local governments and partners.

In a culture that rewards founders and ignores maintainers, allowing multiple Code fors in the same community is likely to lead to a fair amount of excess founding. Ambitious graduates and job seekers would find it appealing to start a Code for, but lose interest once they were settled into a new job. This already happens with tech meetups and campus organizations.

Local entities would likely compete with each other, perhaps sometimes in good ways but also in bad. I have generally not seen strong teamwork among Brigades operating in close proximity.

If there is a need to do “anti-trust” in some larger communities, it might be possible to do city AND county Code fors, or region and city Code fors. Maybe a Code for Raleigh and a Code for Wake County. Code for the Triangle plus a Code for Durham.

There is also a challenge in deciding what is the right geographic unit. Leading Code for the Carolinas, I have fondness for the idea of a state or multi-state organization that explicitly “carves out” communities with local Brigades. That way any Network volunteer also has a local home, and Brigades have their own communities. This might not work in every state, but it might be worth considering.

Here are the remaining comments folks have shared in the Participatory Governance area at Brigade Congress: 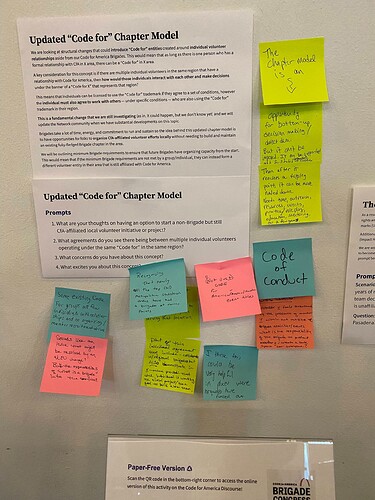