A Brief Recap of Reimagine 911

Reimagine 911 was an experimental program to prototype a system for identifying the 911 calls which can be served without deploying law enforcement. We officially launched Reimagine 911 in February of 2022 and putting it on hold through 2023.

In the United States our 911 system typically defaults to responding to incidents with law enforcement - even when police are not the most appropriate responder. However it is difficult to identify which calls are well suited to other services, and it is especially difficult for organizations outside 911 and law enforcement to assess this. Reimagine 911 explores the potential for identifying 911 diversion candidates by standardizing 911 data and performing multi-city comparisons.

CfA crowdsourcing can identify diversion opportunities for 911 calls.
Initially it was uncertain whether 911 calls could be standardized between cities or if it would be possible to identify calls with potential for diversion. The R911 project showed that by crowdsourcing many volunteers and providing them with a purpose-built platform we can quickly standardize call types from any city (an approach validated by leaders in Seattle 911 and police operations). While work remains to be done to fine tune the identification of diversion candidate calls, we have identified a viable pattern. By applying custom taxonomies to standardized codes, we can identify groups of local call types that may correlate with calls that other cities or other 911 SMEs have identified as good diversion opportunities. More work needs to be done to easily connect local call types to diversion examples suggested by other cities and SMEs

Code for America has the ability to run successful crowdsourcing campaigns.
In the first 3 months of this program, Reimagine 911 engaged over 100 volunteers in active work. Another 800 volunteers continue to open and follow program emails, though we did not have activities for all these people. With the recruiting strength of Code for America, and the volunteer mobilizing and organizing strength of the network team, Reimagine 911 has shown that Code for America has an uncommon tool at its disposal for future projects.

National programs can be designed to collaborate with local brigades.
This is the first example of a CfA-led volunteer initiative that has explored working alongside brigades. Reimagine 911 used its Classifyr tool as a way for brigades to participate in researching and standardizing data from their cities. Code for Gainesville had the deepest participation. In return, the Reimagine 911 program will provide access to the data they helped create, standardized data across other cities, and promotional articles describing their work in the project. This could be a model for how Code for America can engage brigades in mutually beneficial activities.

This is how to advance multi-city 911 transparency!
This program developed a novel dataset and method for standardizing 911 data across jurisdictions. Due to the industry’s hyper-localization and the absence of centralized data collection or guidelines, this information is largely unavailable to researchers and activists who are seeking system change. 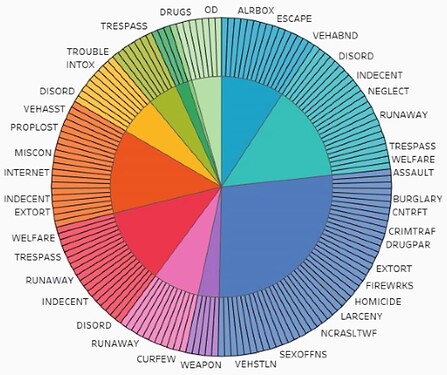 image1012×848 90.3 KB
Above: Standardized incident codes for over 300k calls in 5 cities, grouped by diversion opportunity

The data produced in this program has been publicly published (with some data anonymization, context, & disclaimers) on Data.World and in a dedicated online Gitbook.

Develop a platform for making 911 call diversion recommendations.
An exciting application of Reimagine 911’s experiments and prototypes might be to develop a platform where cities could submit their 911 data and receive recommendations of which 911 calls to divert away from police. When local 911 calls are standardized, it becomes possible to associate calls from one city to those in all other cities. When we identify local 911 calls that are procedurally dispatched to non-law enforcement, it becomes possible to see where the same procedures might be applied in other cities. By analyzing diversion policies, call volume, and local demographic data it becomes possible to promote high-impact, human-centered, policy changes that reduce harm by police in cities across the United States.