Transform911's Blueprint – with assist by Reimagine 911!

Transform911 has just released its Blueprint for Change, a set of recommendations 18 months in the making involving more than 100 professionals from 911 and 911-related fields. Impressively, seven of these people are part of the Code for America Network. The systemic change outlined by the Transform911 Blueprint is thrilling in its detail and its vision, and we are very excited to have played a role in developing it.

Transform911 is a University of Chicago Health Lab initiative to promote a more equitable emergency crisis response system. It is also the partner and inspiration for Code for America’s new Reimagine 911 project.

As the executive director of Transform911, Rebecca Neusteter, wrote in The Little Known, Racist History of the 911 Emergency Call System, today’s 911 system was created in response to the 1967 civil rights protests. Over the course of the 54 years 911 has evolved into a critical public safety system for our country, but it has never parted ways with law enforcement – indeed, the majority of today’s 911 call centers are operated by police and county sheriff offices. Perhaps this is one reason police are the default responders and that 911 call takers have the saying, “when in doubt, send them out”.

Both Transform911 and Code for America’s Reimagine 911 programs are devoted to the idea that 911 should instead be focusing on the needs of the individual and send the right responder for the right call. If the idea that police might not be the best responder for a 911 call, first remember that only 25% of 911 callers are for a crime in progress. Then, consider that a law enforcement approach may actually worsen a situation for some people such as those experiencing a mental health crisis. And lastly, consider all the people—unauthorized migrants, sex workers, people previously traumatized by police, and many more—who are afraid to call 911 during an emergency for fear of involving law enforcement. Impacted individuals and 911 professionals alike have long been aware that 911 needs alternatives to sending out police. 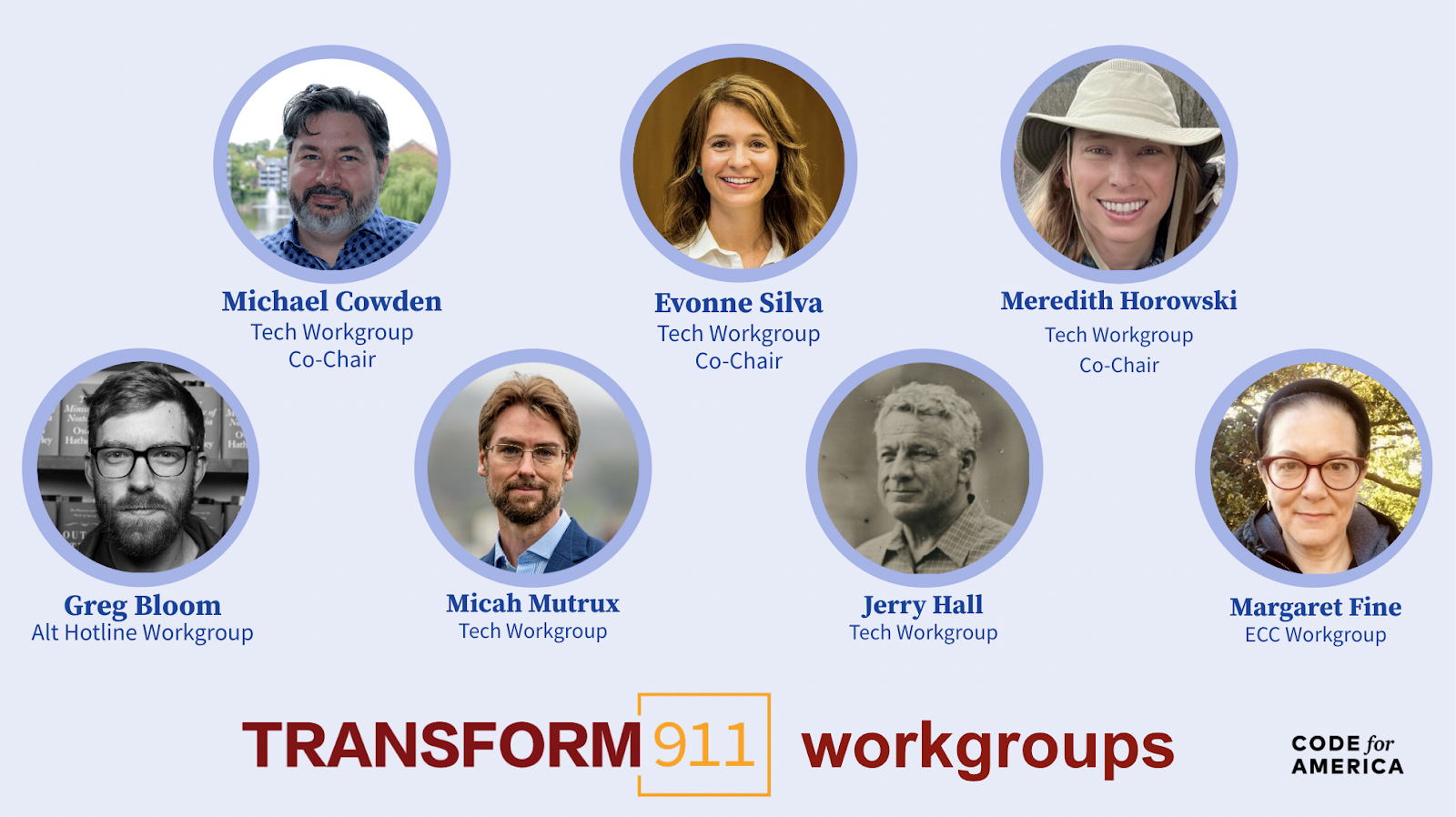 Code for America’s Reimagine 911 project saw particular benefit from our members’ involvement in the Technology and Infrastructure workgroup. In their capacity as workgroup leaders and co-chairs, Michael, Evonne, Meredith and Micah spent 9 months interviewing many individuals whose hands are shaping the future of the 911 system. Hours of conversation with 911 operations directors, federal agencies, industry consultants and providers, and national standards bodies have shaped the exploration and experimentation the Reimagine 911 has performed this year. Particularly regarding the challenge of 911 data standardization.

Due to the hyper-local nature of 911 administration, and total lack of any centralized 911 data collection, it is exceedingly difficult to contextualize any 911 system against any other. This prevents researchers, administrators, and advocates from making the types of observations and analysis needed to understand how 911 can better collaborate with non-police responders.

“Every agency wants to improve interoperability, but most agencies don’t know what improving interoperability actually looks like. Code for America can help with that by demonstrating the value of standardized data. This is the way to solve this problem.”

In the next 3 months, the Reimagine 911 team will begin to do just that—we will standardize the data of 10 cities in order to demonstrate what can be learned once it is finally possible to make multi-jurisdictional comparisons.

Since January, more than 70 volunteers have worked together to deepen our understanding of 911 operations and data availability. These teams have searched 382 cities for call information and have reviewed 145 open datasets. Software development is underway to create a transformation pipeline that will provide Code for America granular control over ingesting and transforming the open data. As part of this work, a data-tagging interface will allow volunteers to associate each 911 call with a standardized incident code and associated category.

We believe that, with a standardized 911 dataset, we can identify calls that are currently being handled by 911 but that are good candidates for diverting to other types of responders. And a standardized dataset that spans many cities will enable comparisons between similar 911 jurisdictions. This could provide researchers and 911 administrators with some specific prospects for better serving their constituents through interoperability with non-police responders.

From the outset, the Reimagine 911 project has intended to find a way to support Transform911 recommendations through the Code for America practice of showing what’s possible through experimentation and people power. With the public release of the Transform911 Blueprint, we see—not surprisingly—that our plans are neatly aligned with the sixth recommendation for “​Strengthening Data and Tech Standards.” 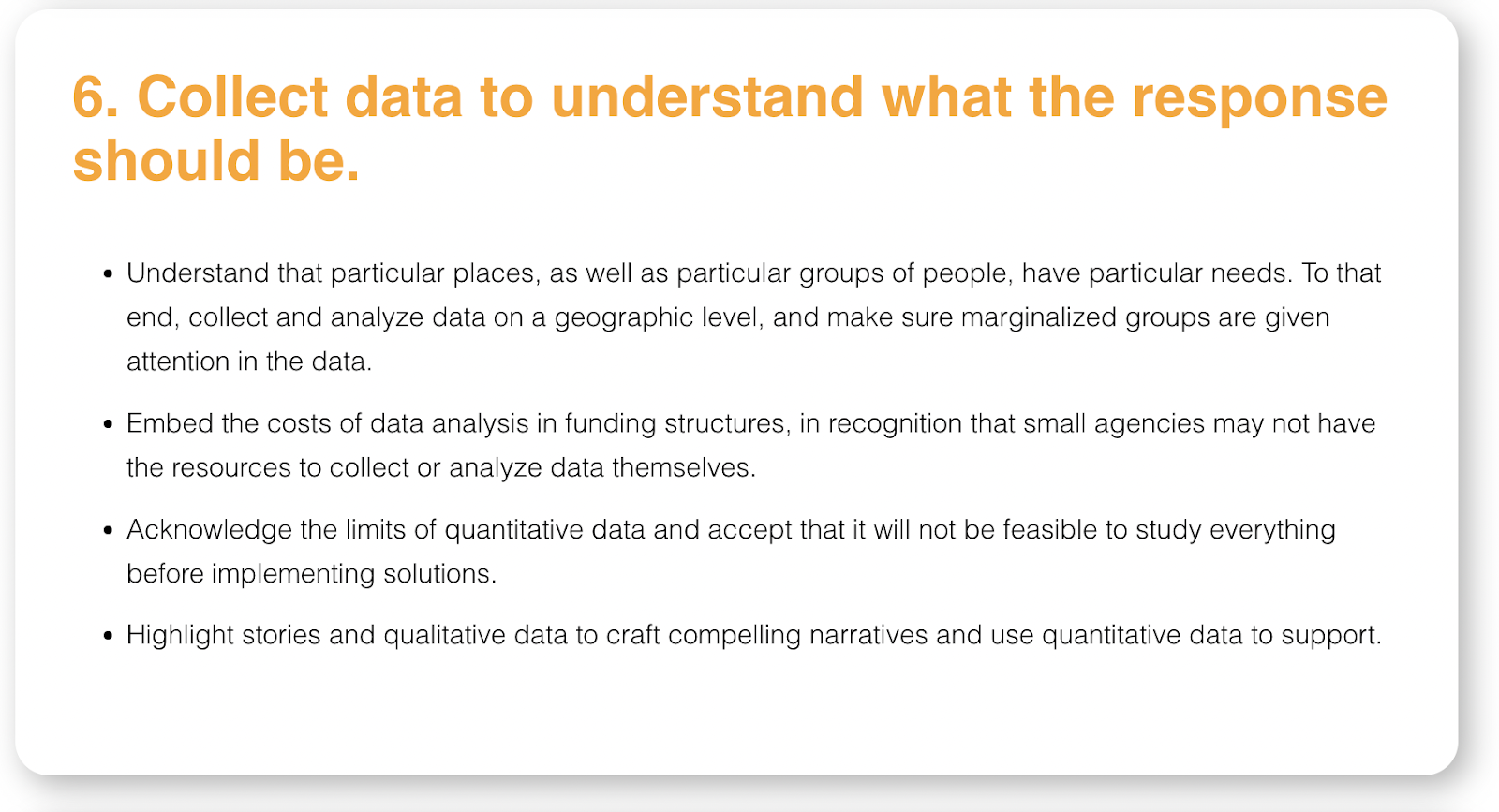 “The time to update and transform the emergency response model in the United States is now,” said Walter Katz, vice president of criminal justice at Arnold Ventures, a philanthropy that is helping to finance Transform911. “Local communities and the country need a comprehensive, transparent, and innovative approach to strengthen the 911 system. These recommendations help establish a more effective, equitable, uniform emergency response that protects public health and safety.”