Project Exposition
Throughout 2021, the nation learned about its worst act of domestic terrorism: The 1921 Tulsa Race Massacre. Through books, documentaries, two shows on HBO, podcasts, visits to Tulsa by two presidents, a new museum in the Greenwood district, a lawsuit filed by the massacre’s three living survivors, and a hip-hop album released by Motown Records, we’ve learned a great deal about the massacre’s violence and trauma. What is far less known is the rest of the history of this community. Just how big was Greenwood? Where were its boundaries? Who lived in Greenwood, and where did they live? When and how did Greenwood rebuild? With the help of journalists, educators, and advocates in Greenwood as well as our community partnership with Tri-City Collective, our goal with the Greenwood Mapping Project is to start to answer some of these questions, from primary sources such as city directories and land records.

The Process
Through the Impact Spring process, we’ve begun building a slide deck presentation that we are looking to share with the community and collect feedback about what information the North Tulsa / Greenwood community would like to see on this map, how they would like to interact with it, and how we might make this a long-term, ongoing project that’s led by the community.

At the same time, we’re collecting data sources to build our digital map. We have a small but mighty team of GIS experts who are reconstructing what the street grid would have looked like in 1921. We also have another small team—Libbie Harris and Patrick Forringer—looking at city directory data from 1920-1923, the 1920 U.S. Census, and one data source in particular that has an astonishing amount of information about Greenwood’s buildings.

Immediately following the massacre, Reverend H. T. S. Johnson and undertaker S. M. Jackson, hired Mary E. Jones Parrish, a writer from New York who taught stenography and typing, to create an account of the Massacre, collect testimonials from victims of the attack (which she published in her book in their raw form), and make an accounting of the properties destroyed by fire. She not only listed these locations by address but also listed the value of each property. This level of investigative journalism was rare for this time. 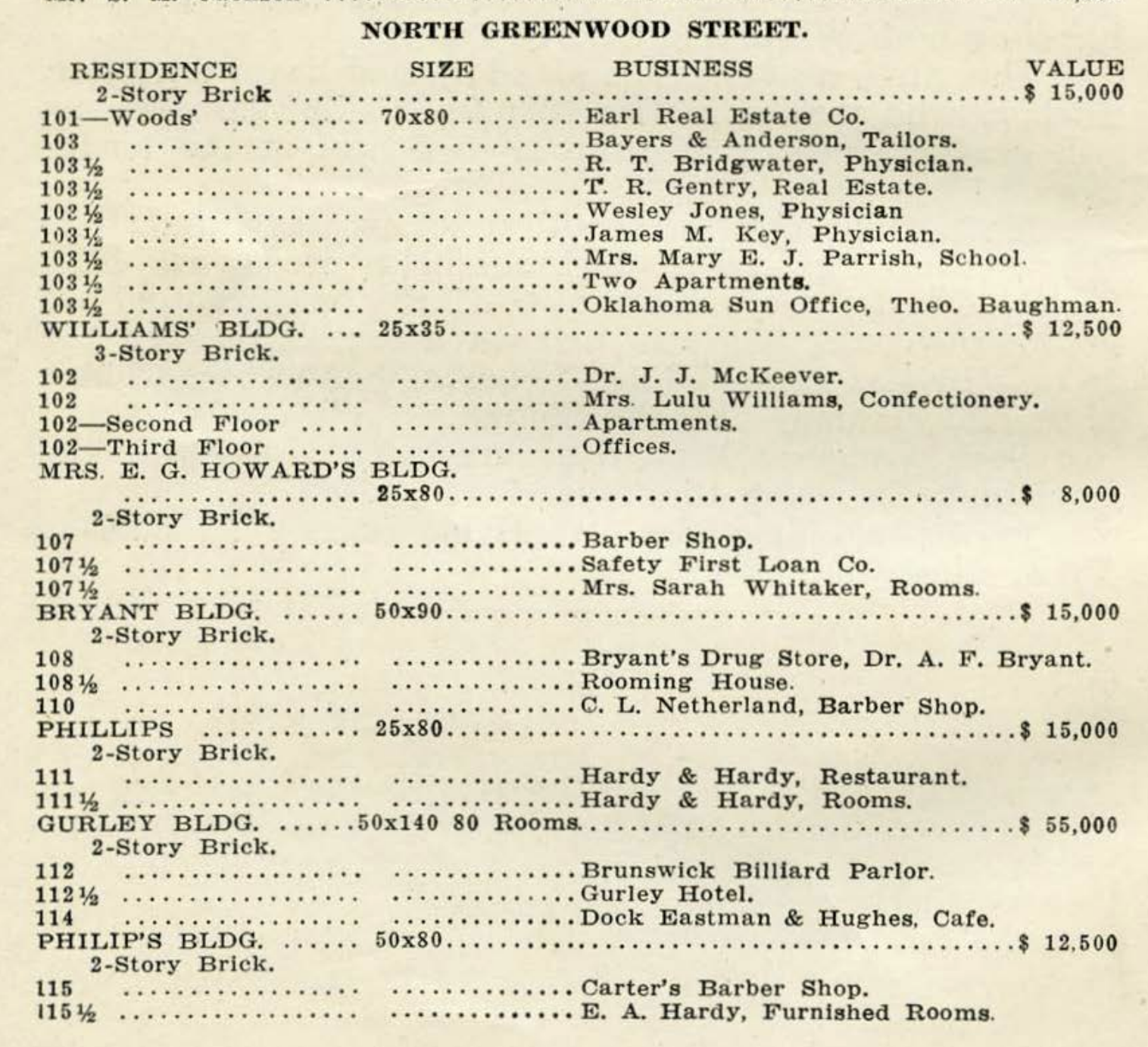 [Image caption: A page from the back of Events of the Tulsa Disaster by Mary E. Jones Parrish, showing a list of buildings along N. Greenwood, including the size, construction, and value of the buildings in addition to the businesses & residences inside of those buildings.]

We’ve read this book a few times and we’re no stranger to Parrish’s list of Greenwood’s buildings, but what we had not noticed until looking at these pages with a fresh perspective is the level of detail she provided for each building—not just its address and value, but details like the construction of the building, its size, and in many cases residences and businesses listed floor-by-floor. Seeing the way that Parrish organized her property data is giving us some new insights into how we might structure the data we’ve collected, from her book and other sources. We’re fascinated to discover what we’ll find when we cross-reference other data sources with the information from Parrish’s book, and we’re struck by how much she is still teaching about Greenwood.

How to get involved
Visit the Greenwood Mapping Project DemocracyLab page to learn more about the project and get involved.